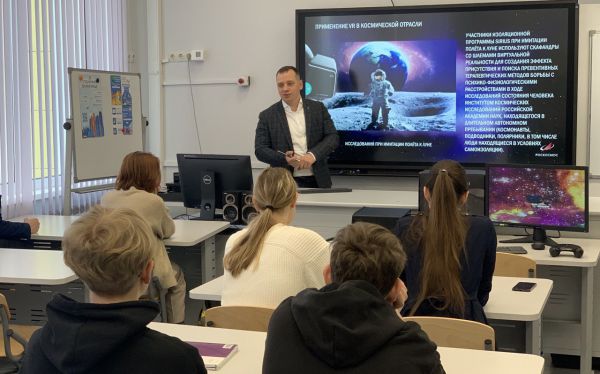 Students of Moscow school No. 1409 got familiarized with a helmet of virtual reality Roscosmos XR-1, technology developed by the Roscosmos specialists. With the help of this kit, students were able to see firsthand the objects of the Universe discovered by the Spektr-RG spacecraft, they tried themselves as cosmonauts making a spacewalk, and also got acquainted with the use of virtual reality in space medicine, cosmonaut training and other areas.

"We hope that the VR technologies demonstrated today, on Cosmonautics Day, which are actually used in our work, will motivate young people to further study the achievements of Russian cosmonautics," said Oksana Pankova, Deputy General Director of Glavkosmos JSC for Economics and Finance. "We expect that the interest of the younger generation in space exploration will grow and encourage some of them to choose a career at Roscosmos enterprises in the future," she added.