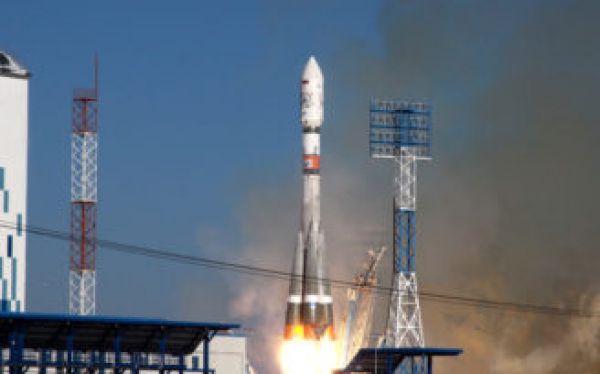 On 1 February 2018, Souyz-2.1a LV complete with Fregat Upper Stage and carrying Earth observation Kanopus-V satellites (No.3 and No.4) and 9 US and German piggyback smallsats contracted by Glavkosmos, successfully lifted off from Vostochny spaceport. It made the 3rd launch performed at the first Russian civilian Cosmodrome «Vostochny».

All the launch systems functioned properly. An hour after Souyz-2.1a lift-off, Fregat Upper Stage injected the primary payload- Earth observation Kanopus-V satellites (No.3 and No.4) — into their target orbits. The satellites’ separation was nominal and took place at 6:06 and 6:12 Moscow time respectively in a sun-synchronous orbit.

Upon Kanopus-V orbiting, Fregat delivered into target orbits 9 US and German smallsats S-Net, Lemur and D-Star One piggybacked under Glavkosmos contracts. The smallsats were nominally deployed from 07:33 till 07:50 Moscow time.

The S-NET constellation is to demonstrate an inter-satellite communication technology within a dedicated network of the four nanosatellites. The S-NET satellites’ builder and end user is Berlin Technical University.

The LEMUR mission provides global ship tracking through the Automatic Identification System (AIS) signals, weather monitoring using GPS-RO instruments, and peaceful aircraft tracking based on an ADS-B terminal. The satellites are built and will be used by SpireGlobal Inc. (USA).

D-Star One mission is to demonstrate and verify a new satellite platform equipped with a transmitter for D-Star radio amateur service. German Orbital Systems GmbH is the manufacture and owner of the satellite.