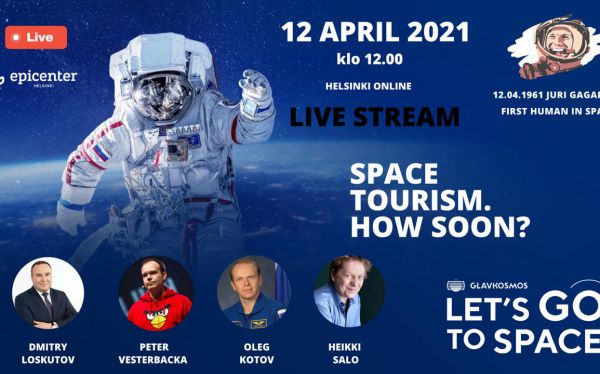 MOSCOW, April 13. – Glavkosmos organized and held a video conference “Space tourism. How Soon?” with the capital of Finland, the city of Helsinki. Dmitry Loskutov, Director General of Glavkosmos, Oleg Kotov, cosmonaut of Roscosmos and Hero of Russia, Peter Vesterbaka, Finnish entrepreneur, founder of the Slush startup conference and one of the creators of Angry Birds and Heikki Salo, musician, author of the popular Finnish song Lennä Juri Gagarin (Fly On, Yuri Gagarin) took part in the event dedicated to the 60th anniversary of Yuri Gagarin's space flight.

During the teleconference, the audience saw archival newsreel footage of Yuri Gagarin's visit to the Finnish capital in 1961. In the discussion, the participants exchanged views on the prospects for the development of space tourism, on the necessary stages of the pre-flight preparation. Moreover, the speakers highlighted the opportunities for tourists to commercialize their space travel and the experience gained from this sort of travel.

At the end of the teleconference, Heikki Salo performed his Lennä Juri Gagarin hit live.

The full version of the teleconference is available on the official Glavkosmos channel in YouTube.