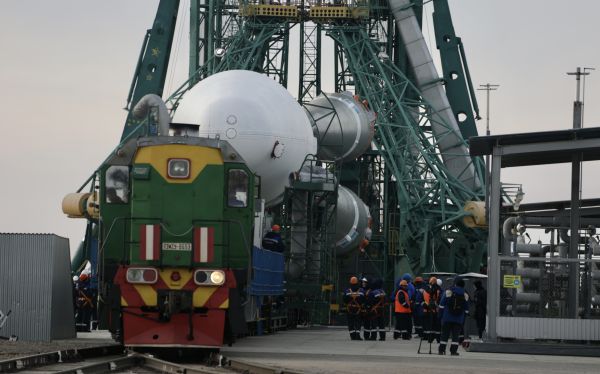 MOSCOW, March 4. - On Friday, March 4, 2022, the State Commission chaired by Roscosmos Deputy Director General for Rocket Engineering, Ground-Based Space Infrastructure Operation, Quality Assurance and Reliability Alexander Lopatin by direction of Roscosmos Director General Dmitry Rogozin has decided to cancel the launch of the Soyuz-2. 1b carrier rocket with the Fregat upper stage and 36 OneWeb spacecraft, previously scheduled for March 4 at 22:41 UTC from the Baikonur Cosmodrome.

At the State Commission meeting, Glavkosmos Director General Dmitry Loskutov (part of Roscosmos), said that on March 2, the company requested confirmation from Arianespace launch operator that the OneWeb spacecraft constellation not to be used for military purposes.

"We received an answer yesterday, which boils down to the fact that our European colleagues believe that the guarantees given in 2018-2019 are sufficient. We are convinced that our demands are legitimate, and these guarantees are no longer relevant due to a significant change in circumstances," said Dmitry Loskutov.

According to him, in addition to the information in the media, OneWeb vehicles are highly likely used by the Pentagon and other military agencies.

"You can see for yourself if you open OneWeb official website, where it is explicitly stated that these vehicles are planned to be used for military purposes. We've been in a partnership with Arianespace for many years and we've always been flexible. Today we are deeply disappointed that they are trying to mislead us and, frankly, to trick us. Data on OneWeb's plans to cooperate with the military are included in the business plan, at the end of last year, OneWeb signed a number of contracts with companies of the military-industrial complex," said Dmitry Loskutov.

He considered it important to pay attention to the fact that OneWeb's official Internet accounts published information about the decision of the company's board of directors to suspend all launches from Baikonur Cosmodrome.

"Under these circumstances, when, in our opinion, the customer does not fulfill the obligations, as well as the publicly voiced position of OneWeb, I consider further work on the preparation of the OneWeb spacecraft launch unreasonable," concluded Dmitry Loskutov.

“Given that OneWeb company has not fulfilled our lawful demands to provide the necessary information about the use or nonuse of the OneWeb system (space communications) in military purposes, including in the interests of Pentagon, as well as military departments of NATO member countries; given that the British government which is conducting a vociferous anti-Russian campaign, remains in the OneWeb Board of Directors, the prelaunch preparations must be stopped, the rocket must be removed from the launchpad and taken back to the technical complex.

The spacecraft must be placed in the assembly and testing facility for standby storage. All the launches from the Russian launch complexes from Kourou, Baikonur and Vostochny on behalf of OneWeb company must be stopped,” said Roscosmos Director General Dmitry Rogozin.

He instructed to place the spacecraft in the assembly and testing facility for preservation and to stop all launches from all Russian launchpads in the interest of OneWeb.

In accordance with the directives, the State Commission chaired by Alexander Lopatin made the following decision:

- To stop work on preparation of the space rocket for OneWeb spacecraft launch (Mission 38);

- The chief of the joint crew to carry out the works to remove the rocket from the launch complex, transport it to the assembly and test building, disassemble the rocket into component parts with subsequent storage at the technical complexes in accordance with the operational documentation;

- To stop the work on preparation for subsequent missions of launching the OneWeb spacecraft;

- The decision is to be executed immediately.

Since 2019, 13 of 19 OneWeb program planned launches of Soyuz rockets with Fregat upper stages from Baikonur and Vostochny cosmodromes and from the Guiana Space Center have been carried out. A total of 428 spacecraft were launched into orbit. The six remaining launches of Soyuz-2.1b rockets from Baikonur were scheduled for 2022, with 216 OneWeb satellites were to be put into orbit.