Ten years ago, the first Soyuz-ST was launched from the Guiana Space Center 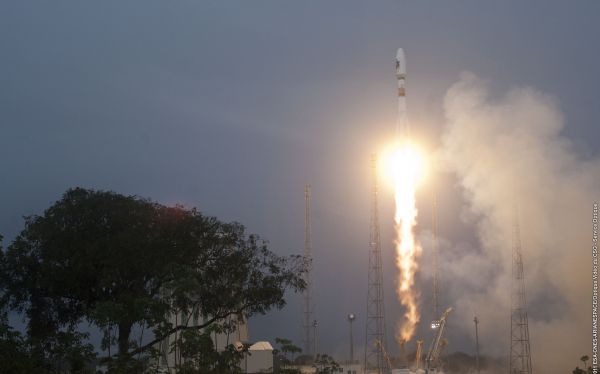 Since that day, up to four launches of Russian launch vehicles have been carried out annually from the Kourou spaceport.

The Guiana Space Center (GSC) is located on the coast of the Atlantic Ocean in French Guiana. Its location near the equator provides a 40% advantage in payload compared to launches from the Baikonur Cosmodrome. The operator of launches from Europe’s Spaceport is the European launch services provider Arianespace; on the Russian side, the main contract integrator of the project is Glavkosmos (part of Roscosmos), providing interaction with Arianespace at all stages.

The Soyuz launch complex is the property of the European Space Agency.

Specially for the Russian-made launch vehicles, a new launch complex – Souyz - was built at the GSC, a memorial stone delivered from the Gagarin Launch at Baikonur, was laid with the foundation the complex.

Two versions of the Soyuz-ST launch vehicle are used at the GSC: Soyuz-ST-A and Soyuz-ST-B. These rockets are an adaptation of the Soyuz-2 launch vehicle to the requirements of the GSC, they are produced by Progress Space Rocket Center (Samara, part of Roscosmos) for commercial spacecraft launches from Europe’s Spaceport.

Specialists of Lavochkin Association (part of Roscosmos) developed and adapted two modifications of the upper stages for the launch of spacecraft into orbits from the GSC: Fregat-M and Fregat-MT. The radio telemetry system of these upper stages can work with the European network of ground tracking stations.