The launch of 36 OneWeb satellites from Vostochny is a success 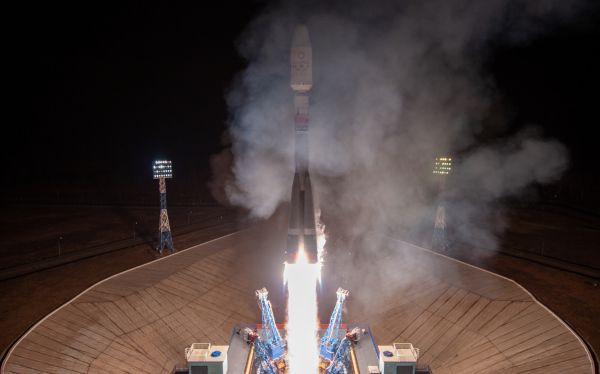 VOSTOCHNY, October 14. - A successful launch of 36 OneWeb satellites aboard the Soyuz-2.1b launch vehicle with the Fregat upper stage was executed on Thursday, October 14, at 09:40 UTC (12:40 Moscow time) from the Vostochny Cosmodrome. The launch of the spacecraft was carried out under the contracts of Glavkosmos (a subsidiary of Roscosmos) with the European launch services provider Arianespace (which operates the launch of OneWeb spacecraft with the use of the Soyuz launch vehicle) and the company Starsem.

The launch was executed by the joint team, which combined the specialists of Roscosmos enterprises - Progress Space Rocket Center, Lavochkin Association, TsENKI, Russian Space Systems, Glavkosmos and those of the foreign customers.

The separation of the Fregat upper stage from the third stage was nominal. In accordance with the flight sequence, the spacecraft were sequentially separated from the upper stage and injected into target orbits.

This launch became the eleventh under the OneWeb program and the sixth performed from the Vostochny Cosmodrome.

OneWeb low Earth orbit satellites are designed to provide consumers on the ground with high-speed Internet. Today’s launch brought the number of OneWeb satellites in orbit to 358 and the company is planning to launch hundreds more.

ROSCOSMOS is a State Corporation established in August 2015 to carry out a comprehensive reform of the Russian rocket and space industry. ROSCOSMOS ensures the implementation of the state policy in space activities and its normative and legal regulations, as well as places orders for the design, production and supply of space equipment and space infrastructure. Its functions also include the development of international space cooperation, as well as the establishing of environment for application of space domain achievements for the social and economic development in Russia