The Soyuz-2.1b with 36 OneWeb communication satellites is installed on the launch pad of the Baikonur Cosmodrome 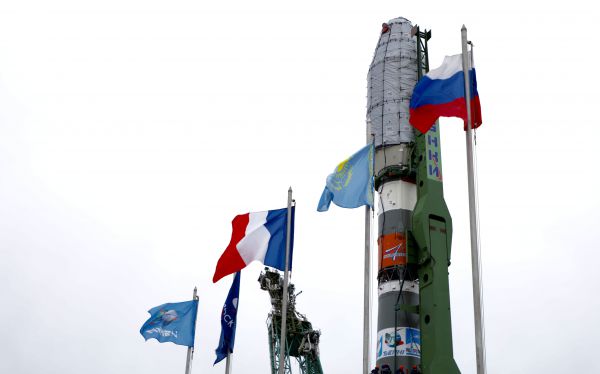 BAIKONUR, December 24. - The Soyuz-2.1b launch vehicle with the Fregat upper stage and 36 OneWeb communications satellites was rolled out from the Assembly and Test Facility on Friday. The launch vehicle was installed on the launch pad of the Baikonur Сosmodrome, the launch is scheduled for Monday, December 27.

The joint team consisting of the foreign customers and the representatives of Roscosmos enterprises Progress Space Rocket Center, Lavochkin Association, TsENKI and Glavkosmos, is carrying out pre-launch works.

These works are carried out under the contracts of Glavkosmos (a subsidiary of Roscosmos) with the European launch services provider Arianespace (the company operates launches of OneWeb spacecraft with the use of the Soyuz launch vehicle), and the company Starsem.

OneWeb low Earth orbit satellites are designed to provide consumers on the ground with high-speed Internet. Now the fleet of the OneWeb satellites in the low Earth orbit amounts to 358 spacecraft, the company plans to launch hundreds more. The upcoming launch should bring the number of OneWeb spacecraft in orbit to 394.