TASS: Russia has no intention to cede space tourism market to US — Glavkosmos company 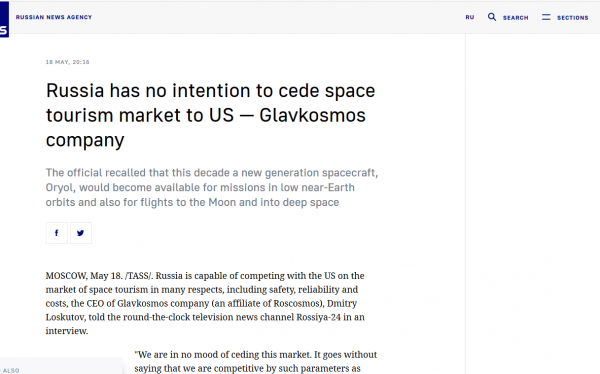 MOSCOW, May 18. /TASS/. Russia is capable of competing with the US on the market of space tourism in many respects, including safety, reliability and costs, the CEO of Glavkosmos company (an affiliate of Roscosmos), Dmitry Loskutov, told the round-the-clock television news channel Rossiya-24 in an interview.

"We are in no mood of ceding this market. It goes without saying that we are competitive by such parameters as safety, reliability and costs. As far as safety is concerned, our emergency rescue system has already proved its effectiveness more than once. Also, we are quite competitive, when it comes to costs," Loskutov said, when asked about competition with the United States in the field of space tourism.

He recalled that this decade a new generation spacecraft, Oryol, would become available for missions in low near-Earth orbits and also for flights to the Moon and into deep space.

"Incidentally, it will be launched with a new generation heavy class rocket, Angara-A5. We are not stalled. But our good old workhorse Soyuz, will certainly stay in service for quite a while," he said.

Glavkosmos is a subsidiary of Roscosmos corporation. Its main task is to promote products and services of Russian space rocket industry enterprises to foreign markets and manage complex international projects.