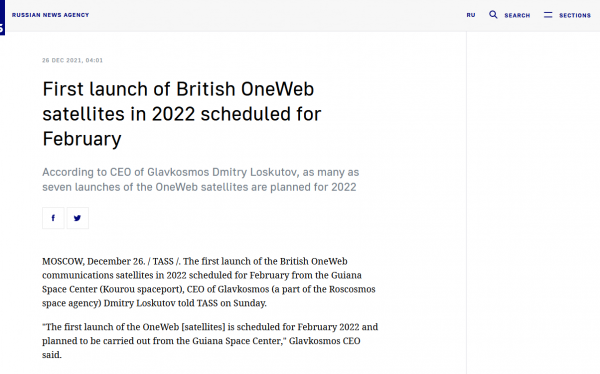 MOSCOW, December 26. /TASS /. The first launch of the British OneWeb communications satellites in 2022 scheduled for February from the Guiana Space Center (Kourou spaceport), CEO of Glavkosmos (a part of the Roscosmos space agency) Dmitry Loskutov told TASS on Sunday.

"The first launch of the OneWeb [satellites] is scheduled for February 2022 and planned to be carried out from the Guiana Space Center," Glavkosmos CEO said.

According to Loskutov, as many as seven launches of the OneWeb satellites are planned for 2022.

The nearest launch of the Soyuz-2.1b rocket carrying the Fregat upper stage and some 36 OneWeb satellites is scheduled for December 27 from the Baikonur spaceport.

The work is proceeding under a contract between Glavkosmos, the European satellite launch company Arianespace and the French-Russian company Starsem.

British OneWeb satellites are designed to create a space-based communications system to provide high-speed Internet access in any locality worldwide.