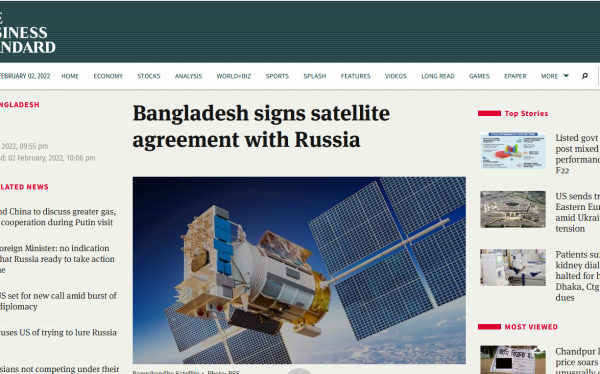 Posts and Telecommunications Minister Mustafa Jabbar termed the agreement a new milestone.  He said the government promised a third submarine cable, launch of 5G and Bangabandhu Satellite-2 in the 2018 national election.

The country entered the 5G era last year, while it has already signed a deal with a consortium for installation of the submarine cable.

"The third promise now sees the light through the signing of this memorandum," said the minister.

Mustafa Jabbar said Dhaka and Moscow have a strong bilateral relationship, and it would flourish further in future. Bangladesh Ambassador to Russia Kamrul Ahsan also echoed the same.

According to a press release of Glavkosmos, the memorandum comes into effect from the moment of signing and will be valid until 31 December 2026.

Referring to the documents, the subsidiary of the Russian State Space Corporation Roscosmos noted that the agreement covers manufacturing and launch of Bangabandhu Satellite-2.

Posts and Telecommunications Secretary Khalilur Rahman and Russian Ambassador to Dhaka Alexander Vikentyevich Mantytskiy were also present at the programme.

Bangladesh's first satellite Bangabandhu Satellite-1 was launched on 12 May 2018. French company Thales Alenia Space made the artificial satellite while it was launched from the United States.