TASS: Prices for commercial spaceflight to go down in 2030s - Glavkosmos CEO 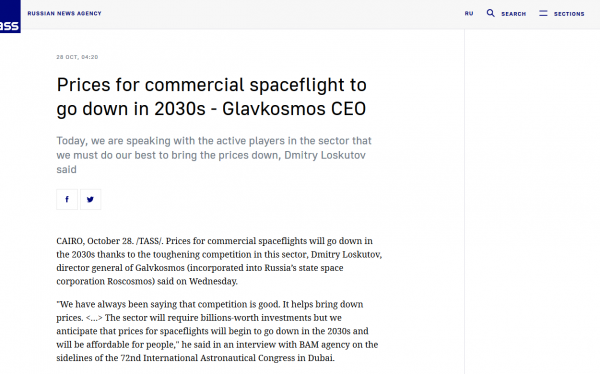 CAIRO, October 28. /TASS/. Prices for commercial spaceflights will go down in the 2030s thanks to the toughening competition in this sector, Dmitry Loskutov, director general of Galvkosmos (incorporated into Russia’s state space corporation Roscosmos) said on Wednesday.

"We have always been saying that competition is good. It helps bring down prices. <…> The sector will require billions-worth investments but we anticipate that prices for spaceflights will begin to go down in the 2030s and will be affordable for people," he said in an interview with BAM agency on the sidelines of the 72nd International Astronautical Congress in Dubai.

"Today, we are speaking with the active players in the sector that we must do our best to bring the prices down. I think our partners heed it," he noted.

It is planned to launch a Soyuz MS-20 manned spaceship with two space tourists, Japanese billionaire Yusaku Maezawa and his aide Yozo Hirano, aboard on December 8. The will spend 12 days in outer space. The spacecraft will be piloted by Roscosmos cosmonaut Alexander Misurkin.

According to Loskutov, the next such launch, with Russian tourists, is planned for late 2023. "The coming year will be very busy, because we plan many spacewalks, a lot of work for cosmonauts. <…> That is why we don’t plan to send tourists to outer space next year," he added.

The Glavkosmos CEO said on Wednesday that his company had signed a preliminary agreement for two commercial launches of Soyuz spacecraft in 2024.

Roscosmos CEO Dmitry Rogozin said on October 26 that the corporation had received a lot of interest in flights to the International Space Station (ISS) from specialists and space tourists from around the world following Russia’s space drama project filmed onboard the ISS.

Sergei Kostenko, head of Space Adventures Russian office, said in late September that the company had potential clients ready to fly to the ISS onboard the Soyuz spacecraft and make a spacewalk.