The Times of India: Astronauts to enter last leg of Russia training 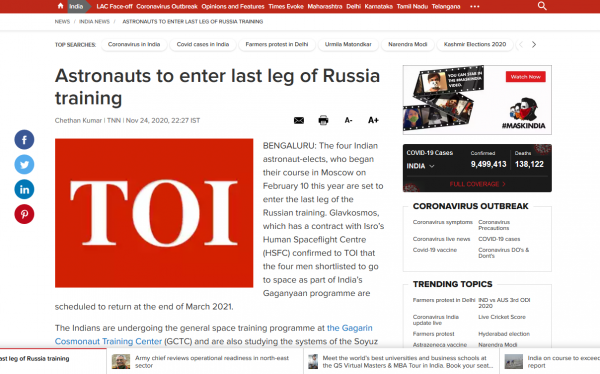 BENGALURU: The four Indian astronaut-elects, who began their course in Moscow on February 10 this year are set to enter the last leg of the Russian training. Glavkosmos, which has a contract with Isro’s Human Spaceflight Centre (HSFC) confirmed to TOI that the four men shortlisted to go to space as part of India’s Gaganyaan programme are scheduled to return at the end of March 2021.

The Indians are undergoing the general space training programme at the Gagarin Cosmonaut Training Center (GCTC) and are also studying the systems of the Soyuz MS crewed spacecraft.

Dmitry Loskutov, director general, Glavkosmos, told TOI on Monday, "By the end of November, they should pass tests in the GCTC centrifuge and hyperbaric chamber module. The Indian astronauts are ongoing as scheduled and are set to be completed by the end of the first quarter 2021."

HSFC and Glavkosmos signed the contract in June 2019 and the Indian astronaut-elects, all of them test pilots of the Indian Air Force (IAF), left for Russia only this year.

Glavkosmos had earlier said that the training programme would be complex and that all its elements are critically important, because only the combination of all aspects allows preparing a person for a spaceflight.

Loskutov said, "So far, Indian astronauts have accomplished training on crew actions in case of an abnormal descent module landing in the forest and marshy areas in winter (February 2020), on the water surface (June 2020), in the steppe in summer (July 2020)."

He added that they have also successfully completed training in short-term weightlessness mode on board the Il-76MDK laboratory aircraft (June 2020). They were also trained to lift aboard a helicopter while evacuating from the descent module landing point (July 2020).

"The study of the Russian language, the configuration, structure and systems of the Soyuz crewed spacecraft, as well as medical and physical training are regular courses of their training, and the Indian astronauts currently continue the study," he said.

As reported by TOI earlier this month, upon their return from Russia, the four men will have a rigorous schedule and are likely to train in Bengaluru, Mumbai and Pune.

Isro chairman K Sivan had said, "The training in Russia is generic and they (astronaut-elects) will be provided Gaganyaan-specific training upon their return. They will have to undergo medical training, psychological training, advanced training, and flight simulation training. The army and navy will help in the survival training."